The use of video calling or online conferencing services, like Zoom or Webex, is particularly common among those whose jobs can be done from home and who are, in fact, working from home all or most of the time. About two-thirds of these workers (66%) say they often use online conferencing services, compared with 49% of those who work from home sometimes and 35% who rarely or never do so. Workers who are new to teleworking during the pandemic are more likely than those who had already been teleworking before the COVID-19 outbreak to use videoconferencing: 77% of those who currently work from home all or most of the time – but rarely or never teleworked previously – say they use these services, compared with 48% who currently telework and did so before the pandemic. 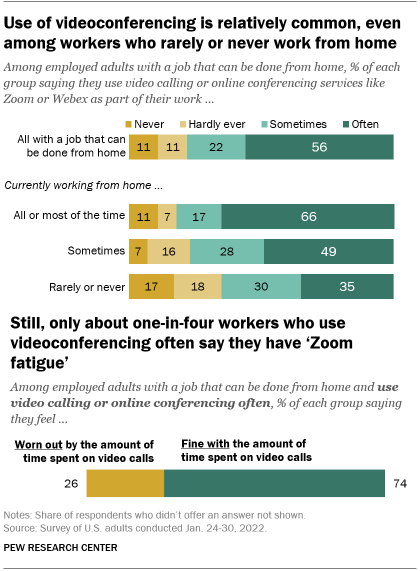 duates with jobs that can be done from home (68%) are also much more likely than those without a four-year college degree (40%) to say they use online conferencing software often. These differences hold up when looking only at those who are working from home all or most of the time.

A Pew Research Center survey conducted in October 2020 – when 71% of those whose jobs can be done from home were teleworking all or most of the time – found that 37% of regular teleworkers who often used online conferencing said they were worn out by the amount of time spent on video calls, while 63% said they were fine with it.

In the more recent survey, there are demographic divides in the impact of frequently using these tools. Workers under 50 whose job can be done from home and who use videoconferencing platforms often are more likely than their counterparts ages 50 and older to feel worn out by the amount of time they spend on video calls (29% vs. 18%). Feeling worn out is also more prevalent among those with a bachelor’s degree or more education (31%) than among those with less education (15%).

Note: Here are the questions used for this analysis, along with responses, and its methodology.

An increasing number of multifamily organizations are adding interactive maps to their community websites. In almost every case, it’s a prospect-centric decision designed to give apartment shoppers better visibility into their potential future home.
While the core functionality is indeed geared to enhance the prospect experience and help them envision their next living space, it is hardly the only application 3D maps have to offer.
Community layouts can be fairly intricate, particularly those containing multiple buildings. And oftentimes, it isn’t only the resident who needs to know their way around the property or how to find a particular apartment home quickly.
Here are some of the additional ways maps can have an impact:
A tool for first responders
A local fire department, ambulance or other emergency response team might be familiar with Brook Oaks South Apartments and can easily use GPS to reach the property. But they probably don’t know where Building 13, Apartment C-8 is, and Google Maps generally can’t navigate that precisely.
The vast majority of 911 calls are now made from smartphones, which is a GPS tracking device in itself. But the map location accuracy it provides to dispatch centers – using satellites and cell phone towers – can be off by as much as 500 feet, more than the length of a football field.
Naturally, time is precious in any first-responder situation and seconds could represent the difference between life and death in some cases. Communities with interactive maps, those that display intricacies of the community in a 3D layout……

Since the World Health Organization (WHO) declared the spreading COVID-19 outbreak a pandemic, we’ve seen businesses and school closings, events being cancelled and in-person contact being limited. As we continue to social distance ourselves, communication, response plans and ideas on how to continue to engage with residents have likely been on your mind or already developed.

Below are some thought starters on what to communicate to current and prospective residents plus unique ways to keep engaged with residents virtually:

Communicate Transparently and Frequently – Make sure all of your social media channels are current and include information about how you’re adapting to the current environment. Update your hours of operation and how residents and prospects can get in touch with staff. Be transparent and just state facts. Communicate daily,weekly or as available to address the property’s COVID-19 response,advice,policies and protocols. Include links to FAQ guides or to authorities and external organizations such as the Centers for Disease Control and Prevention (CDC), The World Health Organization (WHO), Johns Hopkins University, local governments and outbreak maps. Below are some examples of timely topics and updates to provide.
●      Office closures and impacts
●      Amenity space closures, adjustments and guidelines
●      Resident events
●      How to handle rents, renewals and other payments
●      Package handling
●      Maintenance requ……

Oh the times that we live in. The days of constant innovation and technology evolving at faster and faster rates. How do you keep up? It’s a constant battle of innovating to stay relevant while enhancing and streamlining your processes, but also not innovating so much that you lose sight of the basics that have defined successful apartment leasing and management for decades.
With so much constant change, it’s important to stay in the know, form your own opinions about what could work best for you, your team, and your multifamily community, then make educated decisions from there. So what is one of the latest and greatest things that have people abuzz? TikTok! If you haven’t heard of it, that’s alright. It is to teens now what Facebook was to teens in the 2000s.
Let’s take a look at what TikTok is, why it’s all the rage with youth around the world, and take a look at whether or not it’s worth your time investigating for potential apartment marketing purposes.
What is TikTok?
Remember Musical.ly?
Not many people do. It was a 15 second video streaming and sharing app that got acquired by a Chinese company ByteDance. Once acquired, it was rebranded as TikTok, which has absolutely surged in popularity.  Musical.ly focused on lip syncing to music, whereas TikTok consists of 15 second videos ranging from dancing, to lip-synching, to gymnastics, instructional videos, comedy and everything in between — the creative flexibility is up to the user. Musical.ly becoming TikTok was a transformation …… 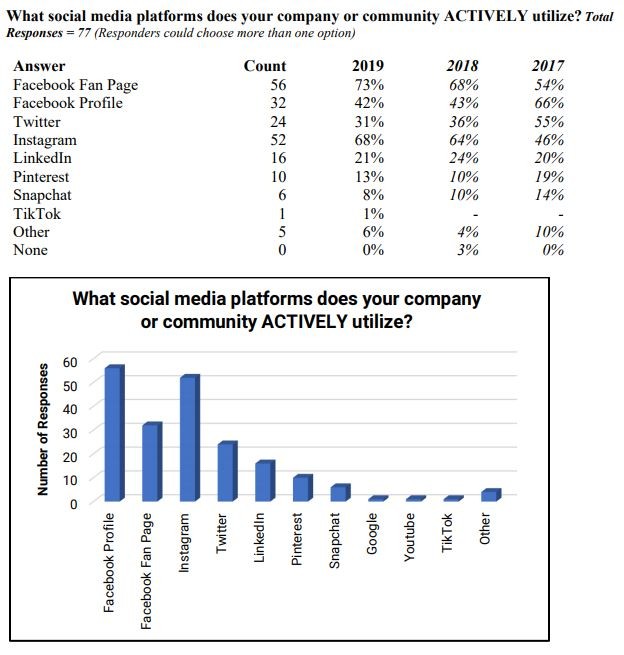 TikTok grew an astounding 500 million users in 2019 as the app gained mainstream traction across the world.  Similar to the Vine app of years past, TikTok has been one of the hottest startups in social media, and yet on first blush, multifamily hasn’t seemed to take notice.

In our 2019 Social Media Research Report, we analyzed use of social media by apartment communities across the industry, and we found that just one responder was actively using TikTok:

On a related note, multifamily didn’t appear to increase its use of Facebook Groups, even when there was a massive push to increase functionality on that piece of the platform: 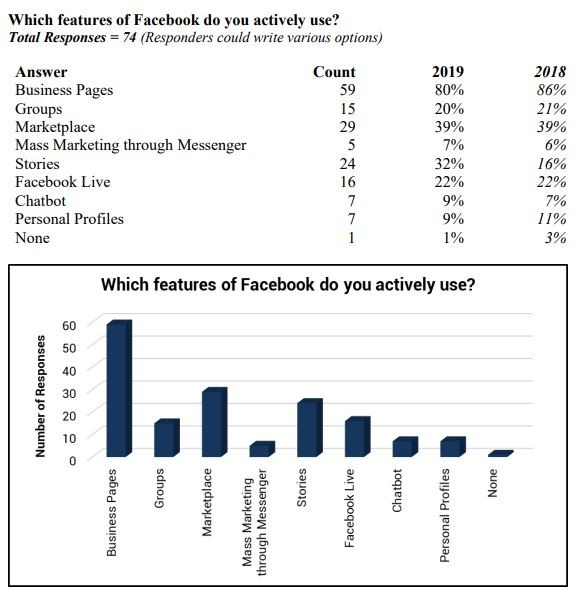 If you would like to see all the results of this study, you can download the full report here.

We would also love to hear your experiences with TikTok or Facebook Groups!  Is anyone effectively using either of these two options in your social media strategy?