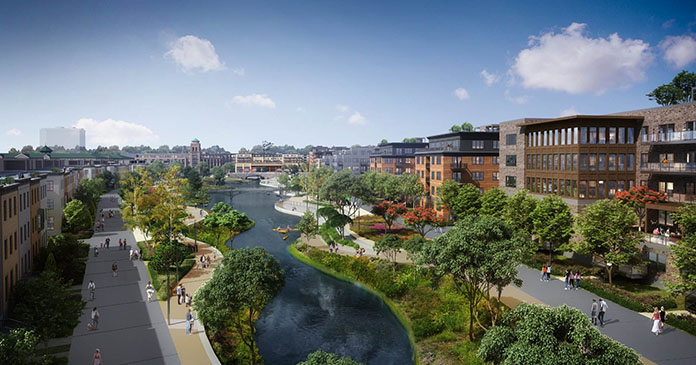 Ryan Companies US, Inc. announced today that it has completed the purchase of the 122-acre parcel of land owned by Ford Motor Company in the Highland Park neighborhood of Saint Paul. The City of Saint Paul Housing and Redevelopment Authority approved a redevelopment agreement on December 4th, defining the private/public partnership with Ryan and paving the way for the $61,000,000 purchase of the site. Ford Motor Company sold the site after nearly a 100-year history of operations and after completing extensive clean up and remediation of the former industrial uses on the site.

Also announced today is the partnership with Weidner Apartment Homes in the development of the market rate apartment facet of the redevelopment plan. As part of the closing transaction, Weidner has purchased several parcels for residential development over the next decade.

“Weidner is a perfect partner for us at the Ford site as they bring a unique combination of financial strength, national market expertise, and long-term ownership perspective” said Mike Ryan, North Region President for Ryan. “Dean Weidner is a visionary, a trusted partner, and from the start, has been on board to push the limits on quality of design for buildings and public spaces.”

Weidner and Ryan Companies are currently working together on the development and construction of the 318-unit Daymark multi-use project in the Uptown neighborhood of Minneapolis.

“The Ford site redevelopment is a once in a generation opportunity and we are thrilled to be a part of this transformative project,” said Greg Cerbana, Weidner’s VP of Public Relations. “The Twin Cities are an important market for us, and we are incredibly excited to join Ryan and add to our footprint in Highland Park.”

Project for Pride in Living and CommonBond announced

Ryan Companies plans to break ground in the spring of 2020 on the redevelopment project, which is expected to span over a decade with an aggregate development value of over $1.3B.  A project website has been established at FordSiteStPaul.com for development updates.

“There will be several more announcements regarding partners, retailers, and users in the months and years ahead, and the real estate closing is a significant milestone in the overall redevelopment of the Ford Site. We are grateful to all those that have supported and challenged us along the way – especially the City of Saint Paul, the residents of Saint Paul, and Ford Motor Company” said Tony Barranco, Ryan’s Senior Vice President of Development.

Ford Motor Company was represented by CBRE in the land sale.