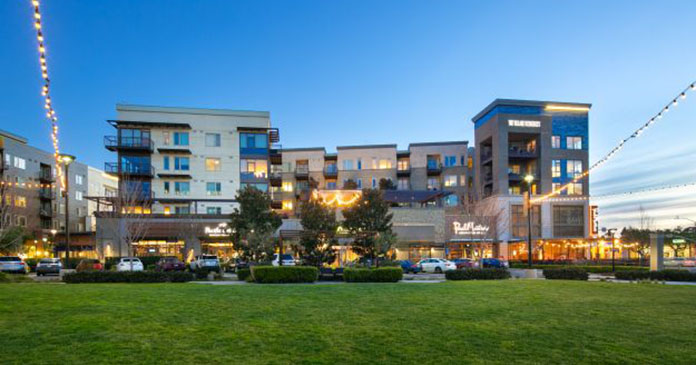 “Located at one of Silicon Valley’s most prominent intersections, The Village represents one of the most iconic mixed-use developments in the region,” said Philip Saglimbeni, IPA senior director. “The world’s most prolific technology companies, including Google, Facebook, Microsoft, LinkedIn, Apple, and Amazon all have major campuses within a five-mile radius of the property. Immediately adjacent to the community is Phase II of the greater Village at San Antonio Center project, which includes 441,000 square feet of Class A office space occupied by Facebook, 91,000 square feet of retail and dining space, a luxury 10-screen cinema, and a boutique 167-room Hyatt Centric hotel.” Philip Saglimbeni, Stanford Jones, IPA executive director, and IPA senior directors Bill Rose and Salvatore Saglimbeni represented the seller, a venture between Carmel Partners and Merlone Geier Partners.

“Residents in The Village Residences have immediate access to 225,000 square feet of Class A retail in the greater Village at San Antonio Center project and are within walking distance of retail and dining options that cater to the busy lifestyle of the area’s tech resident demographic,” noted Rose. “Another key component is the community’s connection to a local train line, which is precisely what today’s renters—including baby boomers and millennials who are moving to the suburbs—are seeking.”

Located at San Antonio Road and El Camino Real in Mountain View, the five-story complex is within walking distance of the San Antonio Caltrain station and less than two miles from downtown Mountain View. Residents are within easy commuting distance of major employment centers in Palo Alto, Sunnyvale, Redwood City, San Mateo, and San Jose. Downtown Los Altos is a mile and a half from the property, downtown Palo Alto is within an eight-minute Caltrain ride and Stanford University is just five miles away.

“Situated between Mountain View and Los Altos, The Village Residences is in one of the most expensive zip codes in the United States,” said Jones. “The median home price is $1.65 million, and the rent-versus-own affordability gap is $7,019, or 249.2 percent, making homeownership nearly unattainable for first-time home buyers.”